It was 24th July 2016. After about 15 weeks of working together, the bonds had been established, team mates were familiar faces and Sundays were more welcome than ever before.

The team was invited by Mr Satish Patil to plant trees in the Nagzari School premises which actually housed two Government Schools and presented an opportunity to plant with the kids. Eager little faces were waiting for us at the site. We set to work and planted 54 trees at the site. 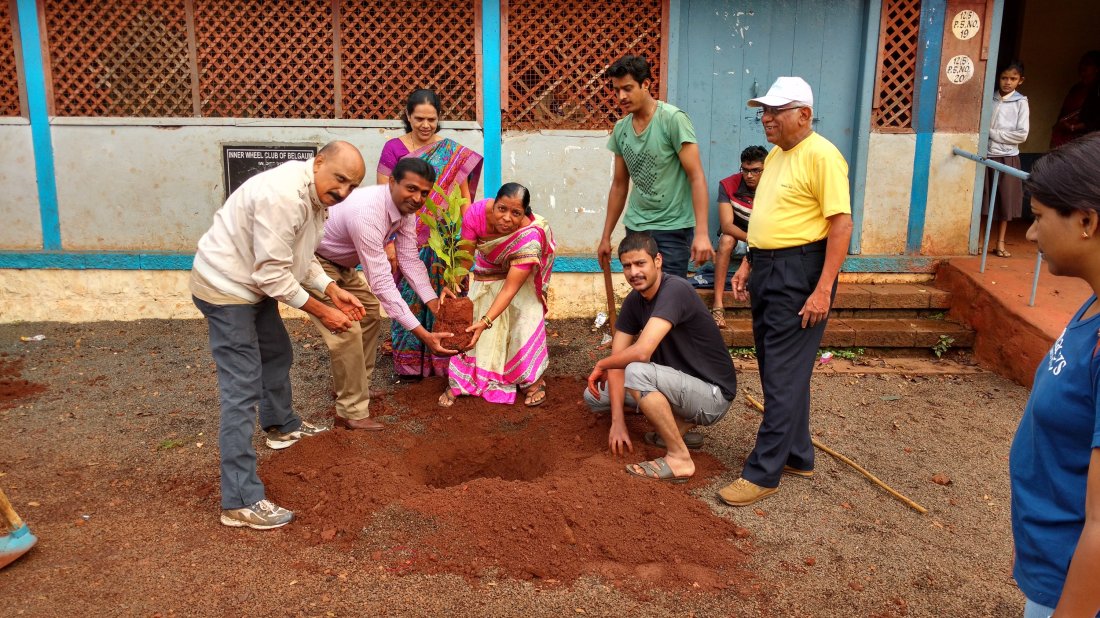 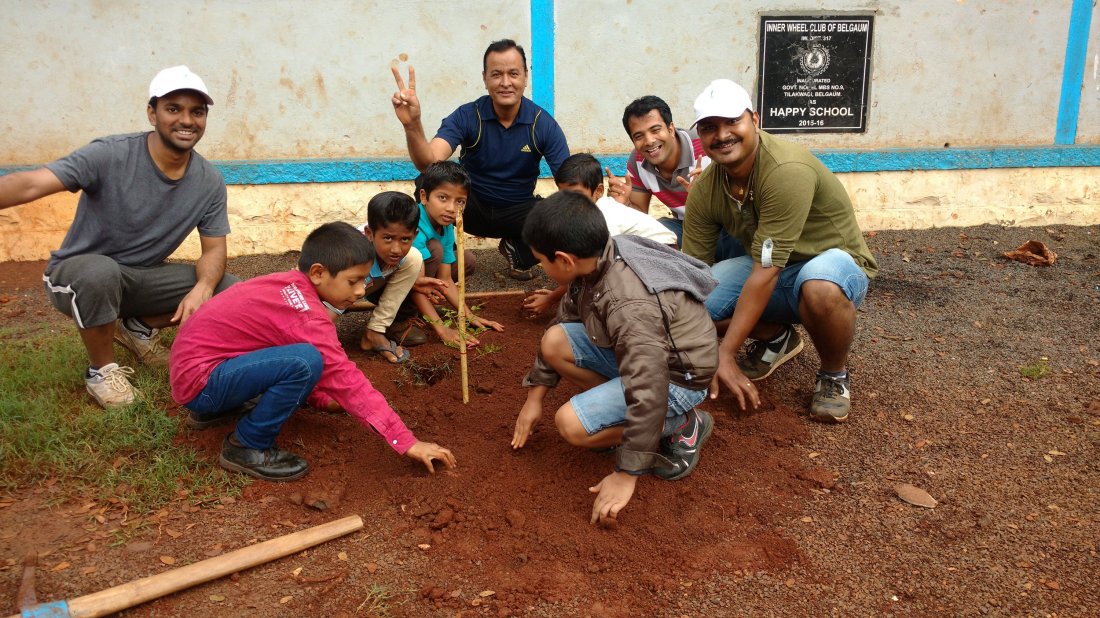 Thanks to the continued efforts of the kids, this site would go on to become one of our most successful sites having an avenue style plantation.

Two little kids from the neighbourhood brought tiny mango seedlings and announced that they would be planting their own saplings.

These two little fellas introduced us to the fact that hundreds of such seedlings are often wasted since they are destroyed during the cleaning of the streets. We resolved to spend time picking up these little offerings of Mother Nature and the Sapling Harvesting initiative of the Green Saviours was planned and subsequently undertaken as an ongoing initiative.

We also conducted our first formal awareness rally and called upon people to wake up to the cause of restoring the greenery in and around the city. We printed our first banner for the occasion. 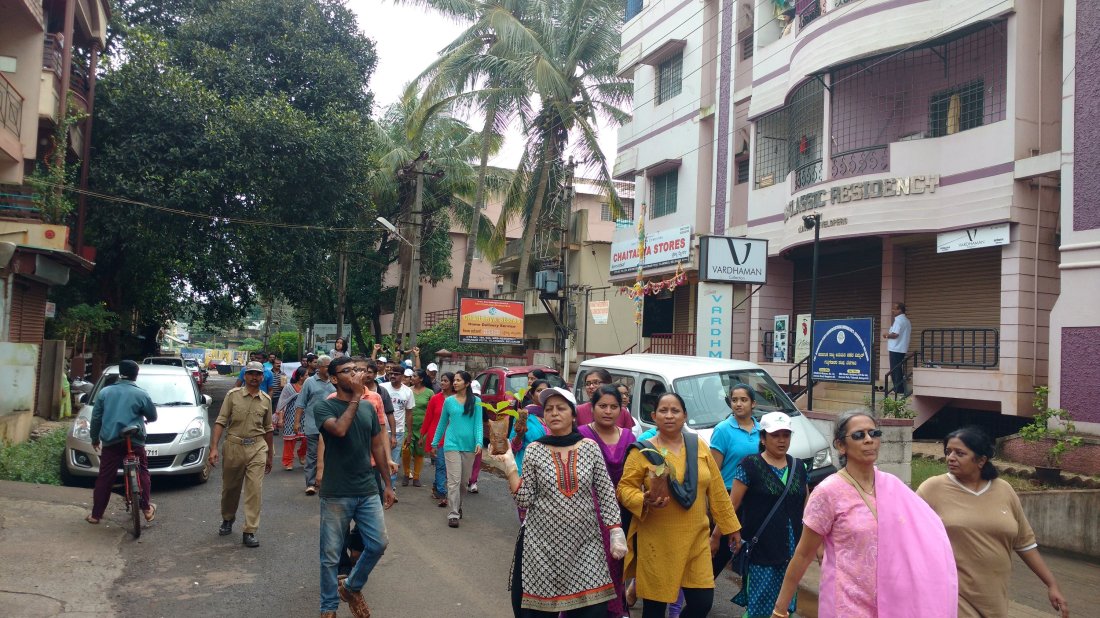 We had for the first time set foot in a school campus and the lessons learnt would go a long way into defining our pattern and scope of work in the days to come.

17th July 2016, the first time we touched the magic number of 250 trees, actually, 254.Nearly 100 volunteers and two buses aiding our travel. In addition to Bharatesh Group of Institutions who had been providing a bus, this time we had a bus provided by KLS Institute of Management and Research.The Golf Course had become a familiar site and the plantation activity, almost a set routine. We no longer ran around in circles trying to find the pits or the plantation spaces. 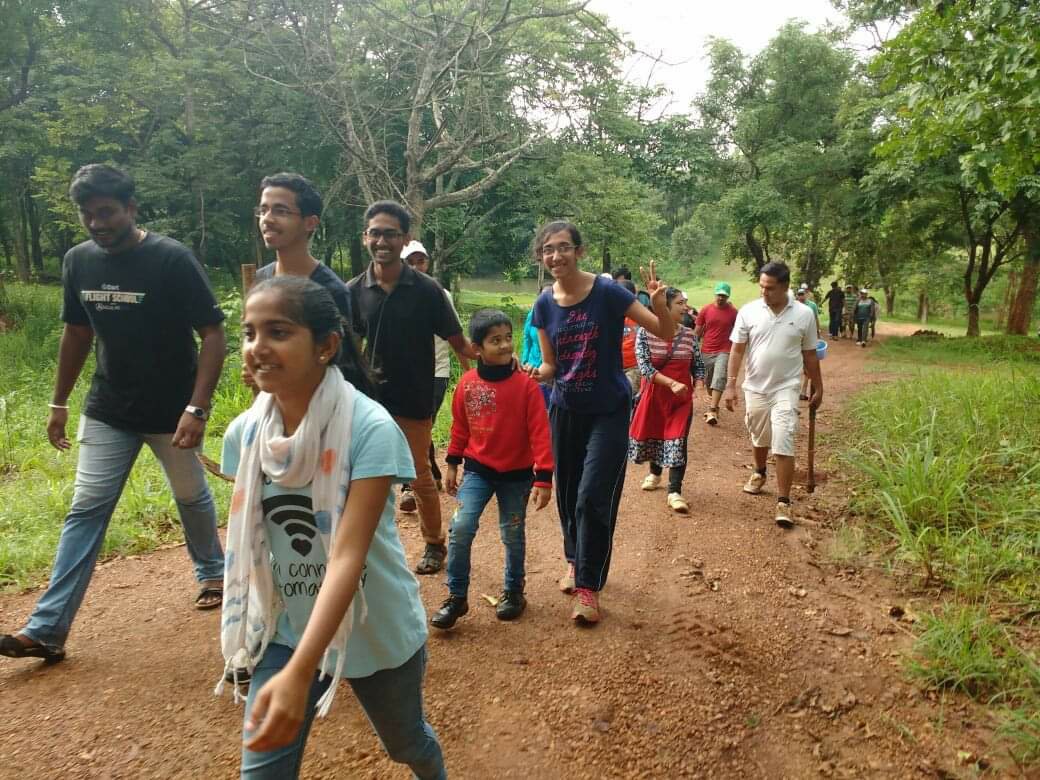 The moist soil was inviting and everything just ideal for a plantation activity. The youngsters team from Kadoli village had travelled all the way to join our work and their farming experience really helped us reach the plantation target for the day.

Mr Mathad from the department of Horticulture provided us some lessons in tree plantation, lessons that helped us with a better understanding of the pit digging and watering operations. Lessons that remain deep rooted in our ways of work to date.

It was 10th July 2016, the number of volunteers had grown and so was the desire to plant. Vacant spaces looked all the more promising. 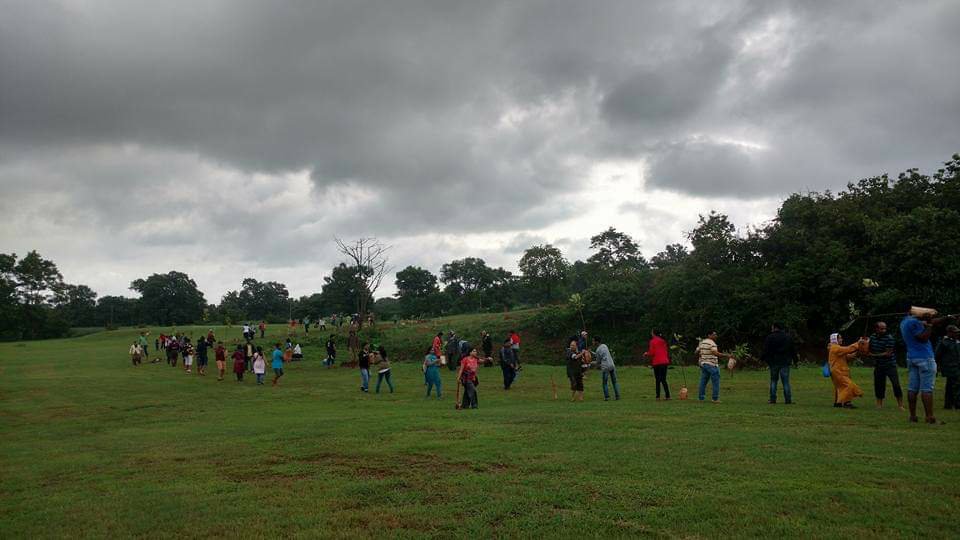 We were covering a larger area across the site and transfer of saplings and planting material was challenging. The monsoon had set it and the overnight rain had been heavy in an unexpacted manner, almost making us consider a cancellation but we persisted. As usual, the rain managed to not catch up with us during the drive, save certain rare showers which were always welcome. The elements of Nature and something within were ensuring that we continued our humble efforts. 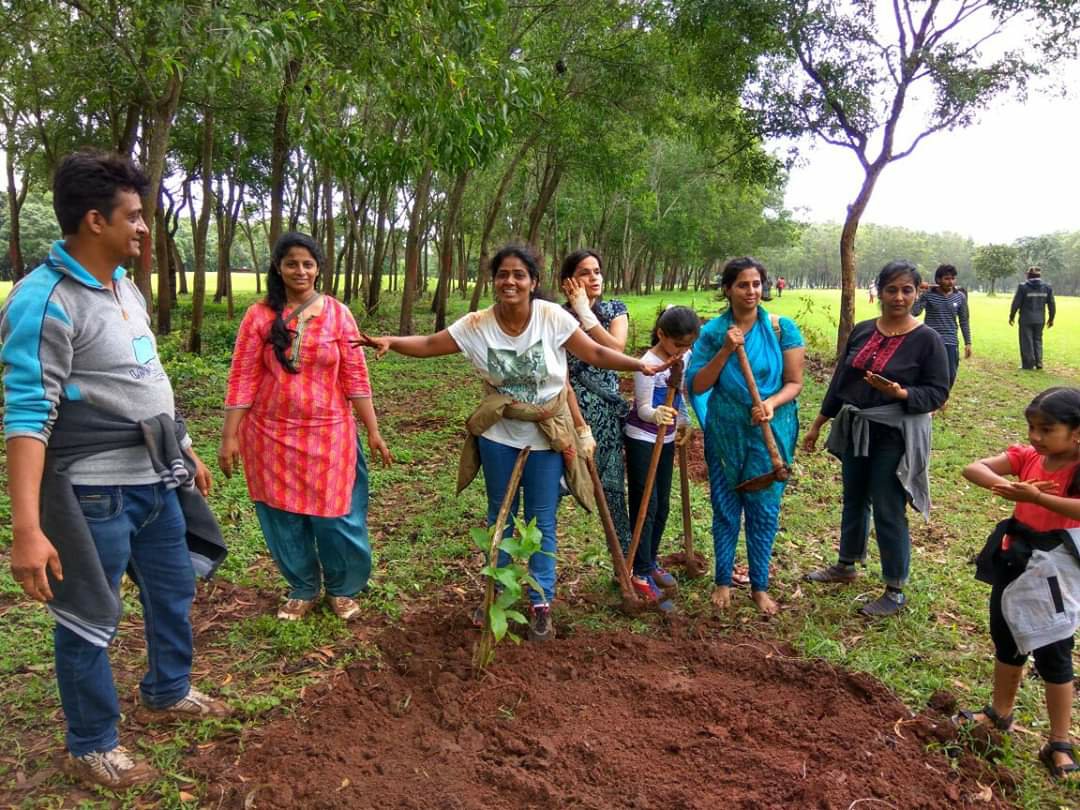 The team planted 235 saplings along the periphery of the lush green expanses. The tractor on site helped with the ferrying of material and people. It also rare opportunity of a ride on a heitherto unexplored mode of travel. 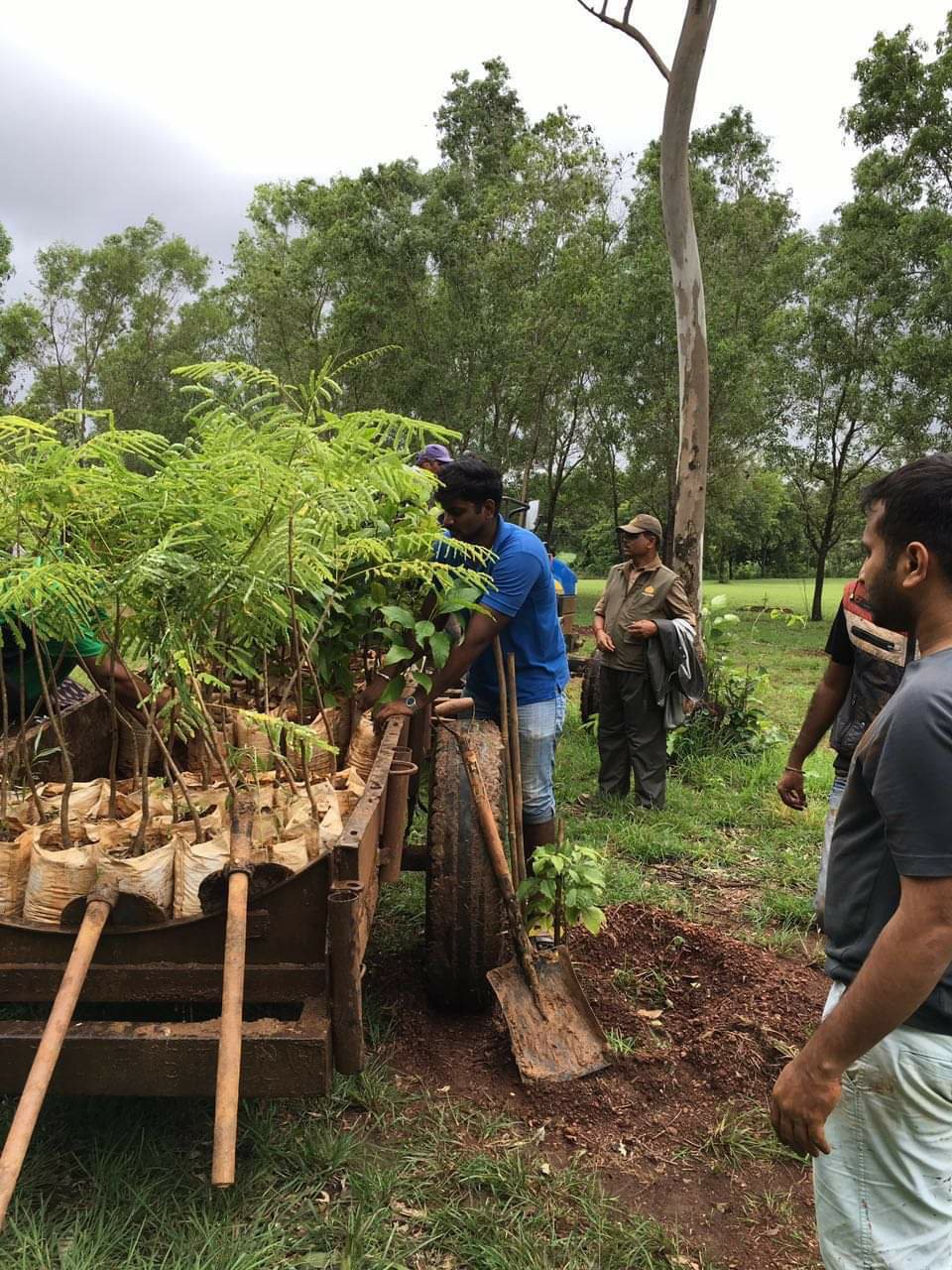 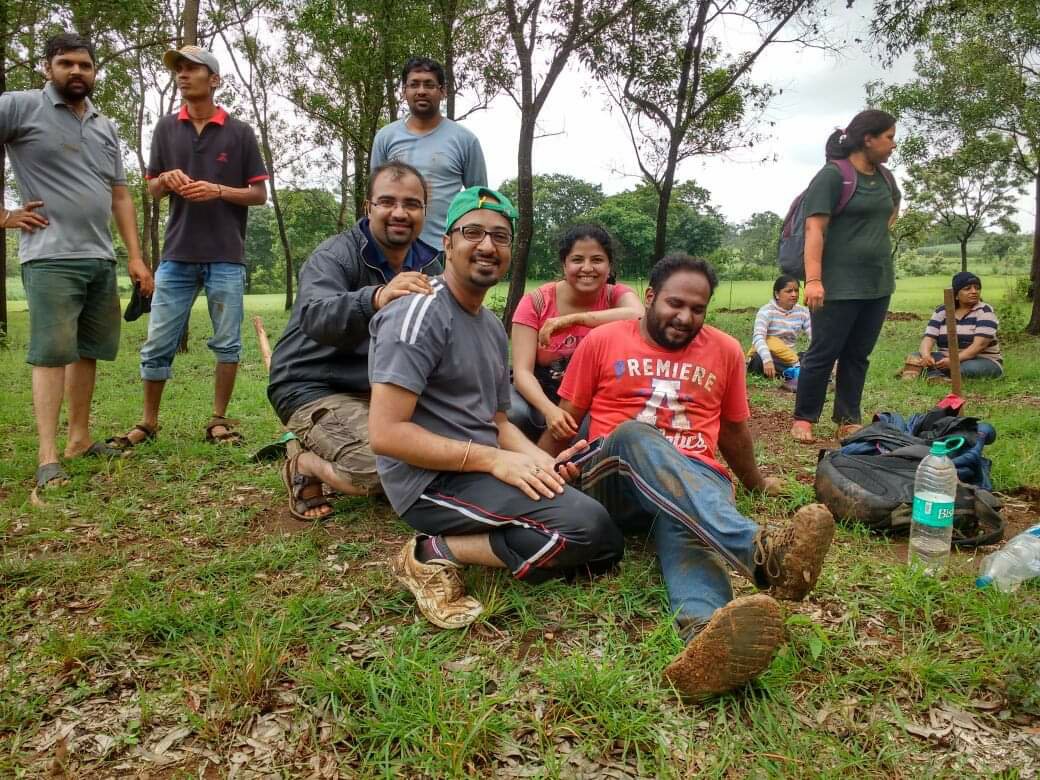 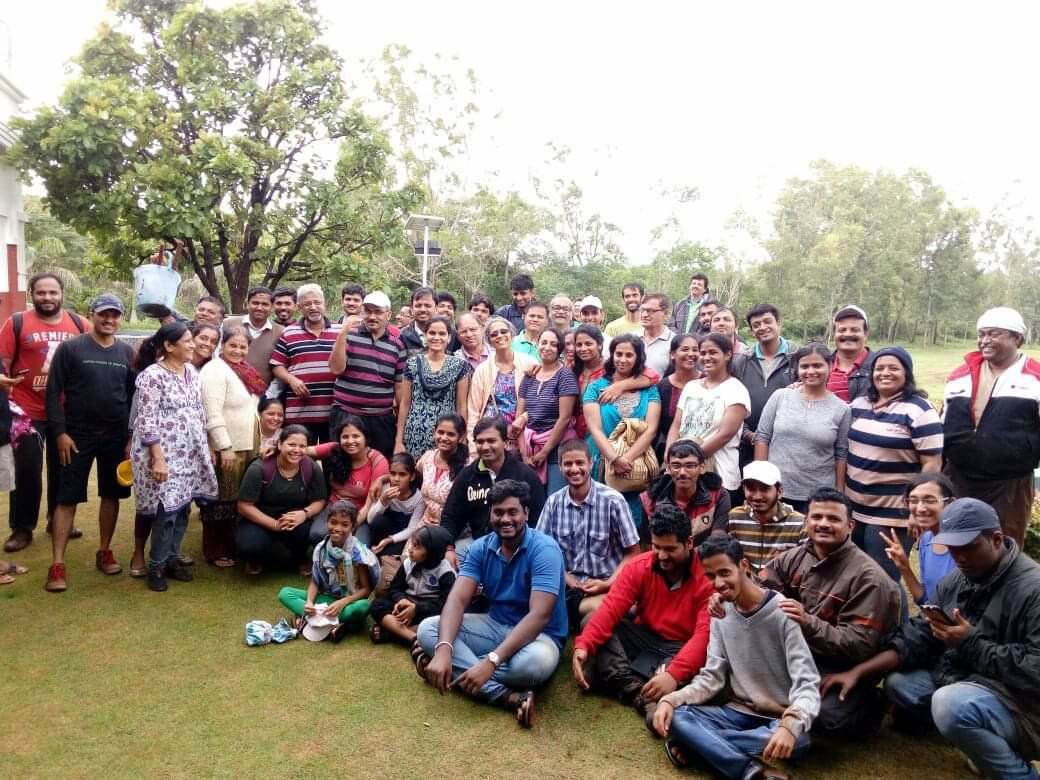 We planted our 1000th sapling to symbolize a new landmark of sorts and despite the tired feet aching for rest, it was an exciting experience and fortified our belief that we could do numbers if the volunteer number continued to grow.

3rd July 2016 is memorable for more reasons than one. We planted trees at 2 sites for the first time and both sites had participants from respective locations.

Nestled discretely in a less known corner of Belagavi, the Kalmeshwar Temple, situated beside a lake is a little hub frequented by multiple species of birds. This was the first location for the Sunday drive. The drive began with a customary “Pooja” routine, offering prayers to the Gods. The Green Saviours team then planted 53 trees at the site and arranged for protection using Bamboo tree guards so that we could fend the saplings from the cattle. 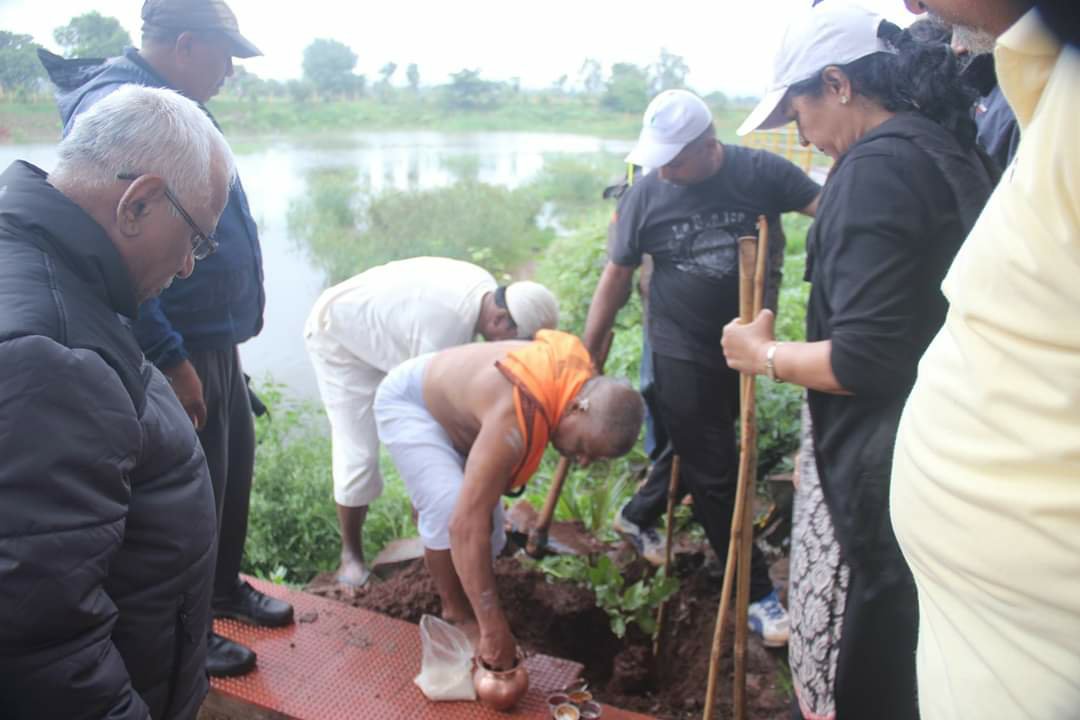 It had rained and consequently although the digging was easy, there was excessive water logging in the pits. The placement of the tree guards was also tough since at times we were knee deep in the mud. It was tough going but the team saw the task through with most of us reminiscing the childhood experience of playing in slushy soil. Participation of the locals also gave an added sense of satisfaction.

The team then moved to the compound of Bharatesh Central School to plant 30 trees, predominantly the “Weeping Fig-Ficus benjamina“, species. The sparrow nest device was also shared and promoted. 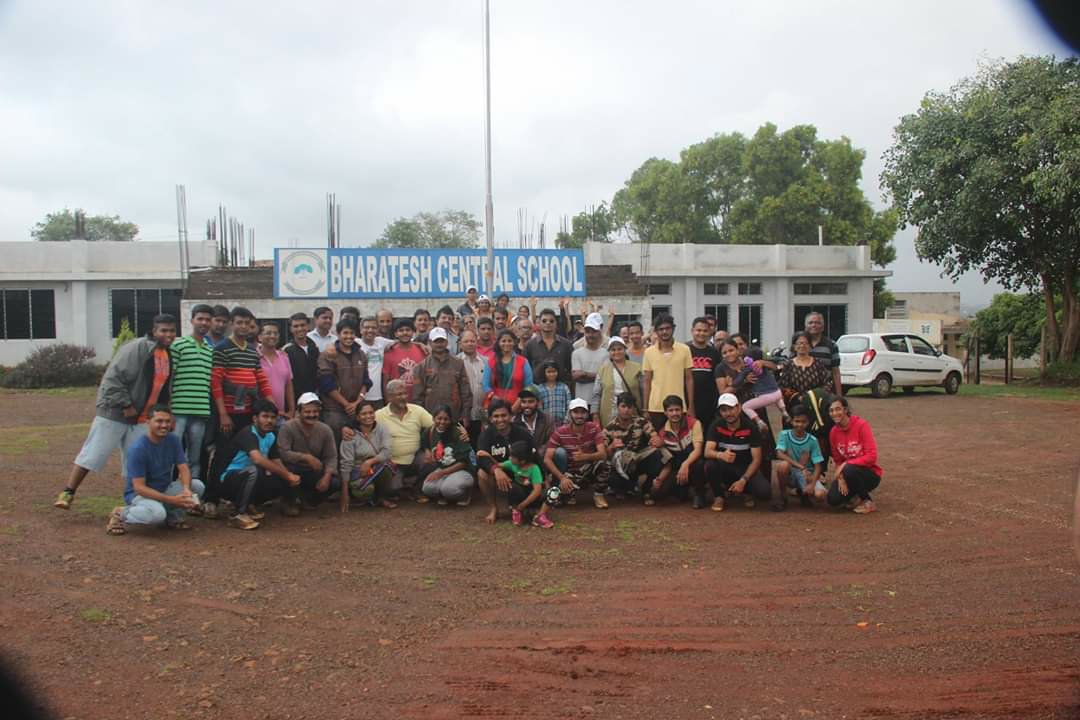 The experience offered abundany learning especially at the Kalameshwar Nagar site since the water logging first made plantation difficult and then went on to destroy the saplings planted. Another challenge of tree plantation was revealed to us. The locals who promised to take care of the saplings did almost nothing in the coming days and the site would end up on our disaster list but all the same,

26th June 2016 stands out as a memorable milestone in the Green Saviours journey. We visited the picturesque location at the Golf Course at Desur near Belagavi and planted 205 saplings. This is the first time that we visualized and realized a score of saplings in excess of two hundred.

A part of the digging was done by the JCB while most of it was managed by the team of volunteers which had touched around 100 in number. The vast expanse of the site was inviting and we spent a lot of time walking around, identifying spots, ferrying saplings and tools.

The lush green expanses of the site were almost like a canvas decorated with different species of trees and vast expanses of grass. The glory of Mother Nature was on display but we could also sense the human intervention that had gone into making it more of a planned space rather than a natural habitat. There were glimpses of Mono Culture which we didnt really perceive as a negative on that date but would go on in time to learn that this is precisely the kind of tree plantation that should not happen.

We had experienced the problems of having extra large pits and having learnt our lesson from the earlier drive, we used the smaller excavator bucket for the dig. Managing a larger team of volunteers was also a first time experience and so was that of carrying saplings around.

These would go on to define work methodologies that would enable us accomplish greater tasks in the days to come.

The drive would have been a greater success had the golfers joined us in our work but that was not to be. Some even objected to the little noises made by the team at work which was also having some moments of fun. This brought in the sense that we were not really welcome but then it was important to continue doing our bit regardless of the whims of a few non cooperating human entities and that’s exactly what we did.

News crept in of the availability of a site that was on the premises of the District Training Centre at Sangameshwar Nagar, Belagavi. The site was pretty large but was largely a landfill and manual digging would be difficult. To add to the difficulty was news that there were quite a few snakes at the site and one would have to exercise extreme caution.

We decided to opt for our first bit of technology in the form of the excavator JCB. A few members supervised the dig but most of us hadn’t seen the pits.

The first rain had blessed the earth and the eager team headed to the site, little aware of the dimensions of the task ahead. On reaching the site we discovered that the pits were too large for our relatively small sapling bags. We had underestimated the size of the excavator bucket and the pits were deep enough to swallow a mid sized human. The land fill meant that there were decent sized rocks that were on site along with barely sufficient soil. 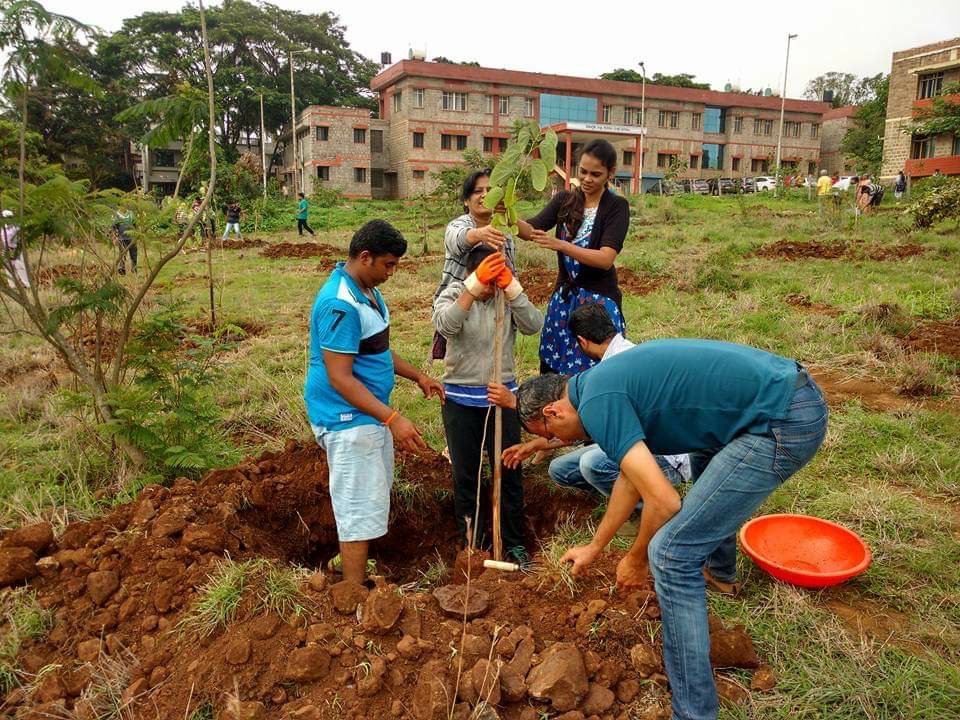 Most of our time was spent in filling up the pits with adequate amount of soil and the balance with rocks. Extreme care was to be taken to ensure that the roots of the new saplings would have enough soil to work their way through.

We had our moments of fun as we provided 75 saplings a new home.

The local festival was celebrated by the women folk by planting Banyan trees as was apt for the occasion. 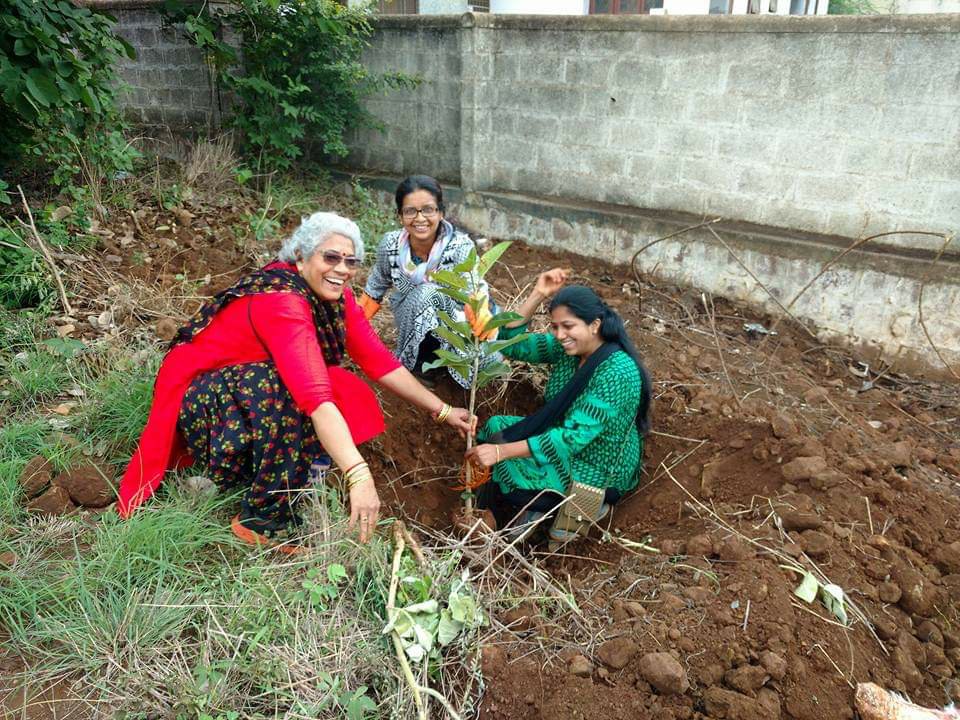 This site on account of its challenges which also included scarcity of water, would go on to be our go to site for Sunday work. It also taught us to be careful with the use of technology. 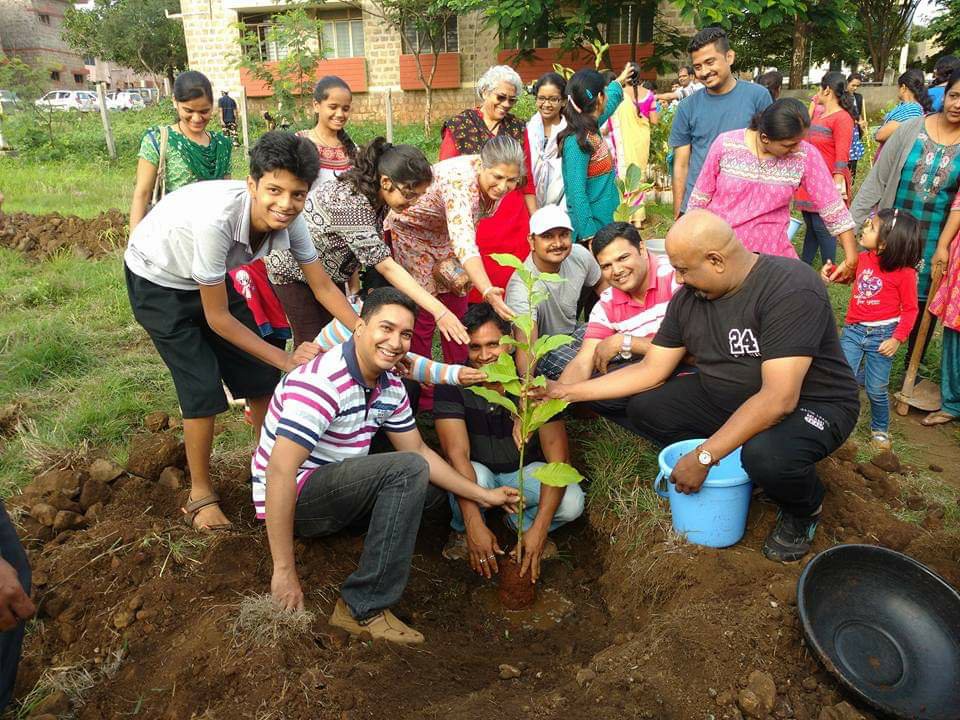 Success on the site was crucial because it was the first encounter will a landfill and more such challenges would emerge in the days to come.

Finding expansive spaces within the urban locales is a rare luxury that we always seek. Add to that a warm invitation to plant and it’s just picture perfect.

On 12th June 2016, the Green Saviours team was invited to plant trees at the Hukkerimath Compound near Ganeshpur, Belagavi. The site belonging to a religious sect promised a safe plantation since it was fenced.

The presence of the Forest officials added and different flavour to the experience.

The seer at the site had requested specific species of saplings and had also pre assigned spaces where we could undertake the plantation (keeping in mind their further plans of ininfrastructural expansion).

The monsoon was not yet set and this meant a tough dig but the numbers were now on our side and with a lot of spirited, able bodied young men, we were able to plant 43 trees across the site.

The presence of inmates at the Ashram would ensure good chances of subsequent care, especially the watering.

The unique feature of the drive was the ddistribution of wooden boxes which were presented to us along with a request to fix them up on trees to serve as nests for sparrows.

We learnt how to plant on a plot that had a gradient and hence warranted the creation contours to arrest the flow of water down the slope.